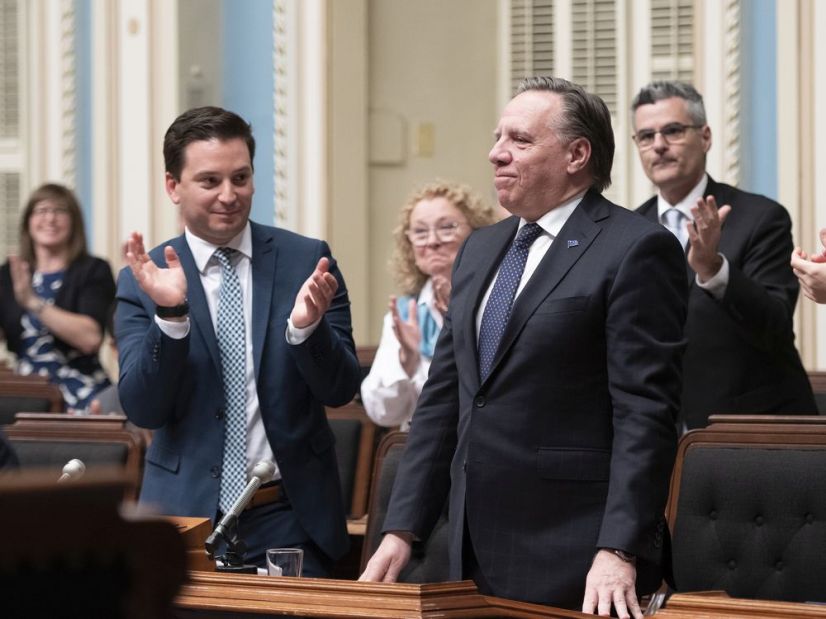 Nine months after the adoption of the anti-hijab law, its supporters are still trying to find evidence to justify it.

In Quebec, we have a state religion: the Church of Legislation. We worship laws and regulations, because we believe there is no problem of earthly existence they can’t solve.

Even imaginary problems, like schoolchildren wanting to convert to Islam because they see their teacher wearing a hijab.

We legislate first, and ask questions later. Nine months after the adoption of the anti-hijab Bill 21, some of its supporters are still trying to find evidence to justify it.

The “laicity” law prohibits government employees newly appointed to certain “positions of authority” from wearing religious symbols while on duty. In practice, the ban affects mainly female Muslim teachers who wear the head scarf known as the hijab.

One of the arguments for applying the law to primary and secondary public-school teachers is that the mere sight of a hijab on a teacher has a “proselytizing” effect on her class. That is, it leads to the children accepting Islamic fundamentalist beliefs, supposedly including female inferiority.

This belief in the magical powers of a piece of cloth amounts to superstition, since there is no evidence to support it.

At least, there was none until this week, when one of the law’s supporters announced a “disclosure.”

A history teacher at Dawson College who is also campaigning for the leadership of the Parti Québécois, Frédéric Bastien is a busy man. Still, he finds time to pore over documents related to Bill 21 court cases in progress.

Last Sunday, he reported on Facebook that in one such case, written depositions from two parents established a connection between hijabs worn by teachers and “religious pressure” on children.

Both allegations involved what Bastien said were hijab-wearing daycare teachers in public schools of what Le Devoir subsequently identified as the French-language Commission scolaire de Montréal (CSDM). (Government employees in positions of authority before Bill 21 was presented last March are allowed to continue to wear religious symbols, as long as they don’t change jobs.)

In one of the reported incidents, a teacher lectured one Muslim girl for not always wearing her hijab, and demanded of another when she would start wearing one. In the other allegation, a teacher scolded a Muslim girl for eating a lunch that did not respect Islamic dietary restrictions, and for not praising Allah when she finished.

In Le Devoir, under the headline “Examples of proselytization at the CSDM,” supporters of Bill 21 were quoted saying the allegations prove the symbols ban is necessary.

Bastien said the reported incidents support his proposal, in his PQ leadership campaign, to expand the prohibition to cover teachers from daycare to university.

And nationalist commentators Richard Martineau and Bernard Drainville said they show that the ban should at least be extended to daycare.

Never mind that the case for Bill 21 was supposed to have been made before it was passed, not after the fact. Bastien’s aha! moment is evidence? Evidence of what?

A widespread problem justifying a law that is discriminatory in effect? Hardly. The allegations concern only two teachers.

That’s out of all the Quebec public-school teachers who wear the hijab. Nobody can say how many there are, since the school boards don’t keep statistics on their employees’ religious practices. But it’s certainly more than two.

So, two such incidents wouldn’t be enough to justify Bill 21, even if they proved what the law’s supporters say they prove. Which they don’t.

For, in the alleged incidents, it wasn’t the religious symbols worn by the teachers that exerted undue pressure on the girls; it was the actions of the teachers. And Bill 21’s symbols ban does not apply to actions. Anyway, a proselytizer doesn’t need to wear a symbol to proselytize.

Certainly, the reported actions were inappropriate on the part of teachers in nondenominational public schools. If the allegations are confirmed, the teachers should be reprimanded.

But supporters of Bill 21 seeking evidence to justify the symbols ban will have to look elsewhere.