CAQ continues to have huge lead in Quebec 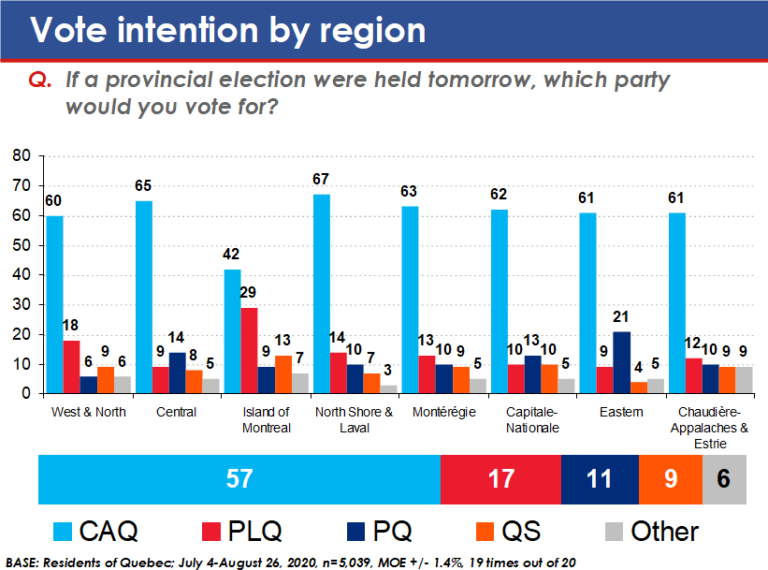 [Ottawa – August 28, 2020] Quebec’s governing party, the Coalition Avenir Québec (CAQ) continues to enjoys a huge lead over the opposition Liberals, with nearly six-in-ten (57%) still backing the right-of-centre party. The CAQ, led by premier François Legault has a 40-point lead over the Liberals, the same margin as in our last poll conducted at the beginning of summer. The Liberals are in a distant second place at 17 points. The Parti Québécois (PQ) is in third place at 11 points and the left-wing Quebec solidaire is at nine points. Six percent of decided voters support other parties. Both the CAQ and the Liberals are down two points from our last poll at the beginning of summer, while the PQ is up three points, and Quebec solidaire remains unchanged. Support for other parties is up one point from five.

The CAQ continues to lead across the province, even on the Island of Montreal, where they lead the Liberals by 13 points (42-29), an increase of three points on the 10 point margin in our last poll, when the CAQ led 42 to 32. Outside of Montreal, the CAQ continues to have large leads in every region, and is polling in the 60 to 67% range in each one. The PQ is strongest in Eastern Quebec, where they are in second place at 21 points, while Quebec solidaire is strongest on the Island of Montreal where they are in third place at 13 points.

There is now more of a gender gap than what we saw in our last poll. While the CAQ has a strong lead with both genders, women (60%) are now somewhat more likely to support the CAQ than men (54%). There continues to be a significant difference in party support among the different age groups. While the CAQ leads among every age group, their lead among younger (under 35) voters is now down to just ten points (35-25) over Quebec solidaire, with the Liberals are still in third at 17%. Among voters over 35, the CAQ continues to have large leads over the Liberals, with leads ranging from 40 to 50 points in each cohort. The PQ polls about equally among each age group, polling in the 11 to 12% range, while Quebec solidaire’s support steadily drops off with older voters, and is in single digits with voters over 50.

A full 14% of respondents remain undecided, up one point from our last poll. The demographic with the largest amount of undecided voters are Anglophones, of which nearly one-quarter (23%) are undecided, down two points.

This survey was conducted using High Definition Interactive Voice Response (HD-IVR™) technology, which allows respondents to enter their preferences by punching the keypad on their phone, rather than telling them to an operator. In an effort to reduce the coverage bias of landline only RDD, we created a dual landline/cell phone RDD sampling frame for this research. As a result, we are able to reach those with a landline and cell phone, as well as cell phone only households and landline only households.

Please note that the margin of error increases when the results are sub-divided (i.e., error margins for sub-groups such as region, sex, age, education). All the data have been statistically weighted by age, gender, education, language, and region to ensure the sample’s composition reflects that of the Quebec electorate, according to Census data and past election turnouts.

Please click here for a copy of the questionnaire that was used for this survey.