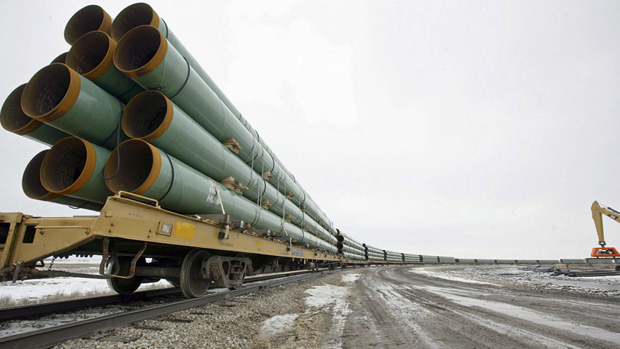 CALGARY — TransCanada Corp. said Friday its controversial and long-delayed Keystone XL pipeline will be in service months later than expected and cost more than its current US$5.3 billion pricetag as it continues to await U.S. government approval.
TransCanada (TSX:TRP) had been sticking to its late 2014 or early 2015 start up target, but the longer the regulatory process dragged on, the more difficult achieving that target became. It is now looking at a late-2015 start-up.
The company has said it needs two solid summer construction seasons to get the pipe in the ground.
“Based on our pipeline construction experience, the US$5.3 billion cost estimate will increase depending on the timing of the permit,” TransCanada said in a release.
So far, it has sunk US$1.8 billion into the project.
Its shares fell 1.8 per cent to $48.86 in late-morning trading on the Toronto Stock exchange.
Keystone XL is only one of several megaprojects planned by TransCanada over the next three years, but it has been a target of environmental groups mainly because of its connection with the oilsands industry.
There have also been concerns about the effects of the pipeline itself, mostly in Nebraska, which is home to a sensitive ecosystem of grass-covered sand dunes known as the Sand Hills and sits atop an important fresh-water aquifer.
The Obama administration rejected an earlier iteration of the Keystone XL project — which would have run from Hardisty, Alta., to the Texas coast— last year because of environmental concerns in Nebraska.
The company responded by breaking up the project into two parts and going ahead with the southern leg between Oklahoma and the U.S. Gulf Coast, which does not require presidential approval. That US$2.3-billion project is about 70 per cent complete and on track to start delivering crude late this year.
The U.S. State Department is weighing whether to award a permit for the more contentious northern part, which crosses the border and includes a reworked route through Nebraska. Critics have scoffed at the new route, saying it still poses a threat to the Ogallala aquifer and Sand Hills region.
The U.S. State Department issued a draft environmental report earlier last month that flagged no major concerns with the project.
A 45-day public comment period has wrapped up, and next the State Department will issue a final environmental report. After that, it will consult with other government agencies for up to 90 to determine if the project is in the U.S. national interest. U.S. President Barack Obama has the final say.
Earlier this week the Environmental Protection Agency denounced the State Department’s positive draft review, urging it to rethink its finding that Keystone XL would not lead to higher output from Alberta’s carbon-intensive oilsands or boost greenhouse gas emissions.
Also Friday, TransCanada reported it earned $446 million, or 63 cents per share, in its first quarter, up from 50 cents per share or $352 million in the first quarter of 2012.
Comparable earnings for the quarter, which exclude unrealized gains and losses from derivatives, were $370 million or 52 cents per share, up slightly from $363 million or 52 cents per share a year ago.
Revenue was $2.25 billion, up from $1.9 billion in the first quarter of 2012.
Analysts polled by Thomson Reuters were on average expecting earnings per share of 53 cents and revenues of $2.1 billion.
Meanwhile, the company has been looking to ship crude to Eastern Canadian refineries by converting part of its underused natural gas mainline to oil service.
New pipe would need to built between Quebec and Saint John, N.B., which is home to the huge Irving Oil refinery. Saint John is also home to a big deepwater port, from which crude can be exported via tanker.
Though TransCanada’s oil projects have been grabbing the most headlines lately, its core business involves shipping natural gas through its vast continental network. It also has several power generation assets.