UK to close door to non-English speakers and unskilled workers 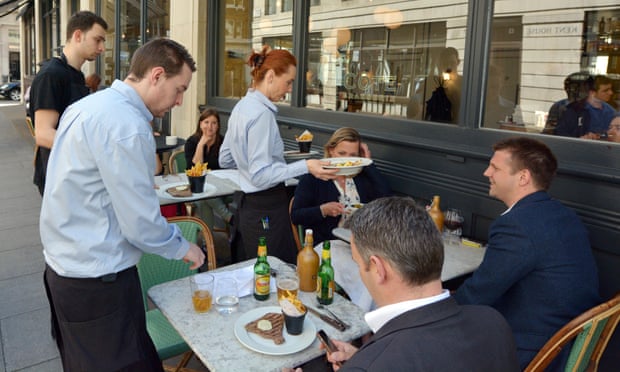 Government plans to take ‘full control’ of borders a disaster for economy and jobs, say industry leaders and Labour.

Britain is to close its borders to unskilled workers and those who can’t speak English as part of a fundamental overhaul of immigration laws that will end the era of cheap EU labour in factories, warehouses, hotels and restaurants.

Unveiling its Australian-style points system on Wednesday, the government will say it is grasping a unique opportunity to take “full control” of British borders “for the first time in decades” and eliminate the “distortion” caused by EU freedom of movement.

But industry leaders immediately accused the government of an assault on the economy warning of “disastrous” consequences with job losses and closures in factories and the high street.

Labour and the Liberal Democrats also condemned the plans while Unison, which represents health workers said they “spell absolute disaster for the care sector”.

However, ministers argue they are delivering the Brexit demanded by the electorate – and say it is time for businesses to wean themselves off cheap migrant labour.

• UK borders will be closed to non-skilled workers – and all migrants will have to speak English.

• Anyone wanting to come to the UK to work must have a job offer with a salary threshold of £25,600 – though a salary “floor” of £20,480 will be acceptable in special cases where there might have a skills shortage skills, such as in nursing.

• There will be no route for self-employed people coming into the UK, spelling the end to, for example, Polish plumbers or Romanian builders arriving without a job.

• Border control will no longer accept ID cards from countries such as France and Italy. This, it is understood, is an attempt to clamp down on non-EU workers beating the system with forged or stolen ID cards.

Guardian Today: the headlines, the analysis, the debate - sent direct to you

• The skills threshold for foreign nationals wanting to work in the UK will be lowered from degree to A-levels or their equivalent. The cap on the numbers of skilled workers is being scrapped – and a small number of highly skilled workers will be allowed to come in without a job.

• The right of artists, entertainers, sports people and musicians to enter for performances, competitions and auditions will be retained.

The government intends to launch a “comprehensive” campaign to prepare employers for the transformation in January next year when EU citizens will be treated the same as other nationals.

However, the new policy drew immediate criticism from employers, particularly over the addition of waiters, waitresses and “elementary” agriculture and fishery workers to the list of low-skilled workers.

Industry leaders warned the changes would have a huge impact on food processing factories that rely heavily on EU workers to keep the supermarket shelves full with pre-packed chicken, beef and pork cuts.

Tom Hadley, director of policy at the Recruitment and Employment Confederation, said: “Jobs the government considers ‘low-skilled’ are vital to wellbeing and business growth. The announcement threatens to shut out the people we need to provide services the public rely on.

“We need access to workers that can help us look after the elderly, build homes and keep the economy strong.”

UKHospitality chief executive, Kate Nicholls, said “ruling out a temporary, low-skilled route for migration in just 10 months’ time would be disastrous for the hospitality sector and the British people” and deter investment in the high street.

The Confederation of British Industry director general Carolyn Fairbairn said the removal of the cap on the number of skilled workers was “welcome”, but she warned that in “some sectors, firms would be left wondering how they would recruit the people needed to run their businesses.

“With already low unemployment, firms in care, construction, hospitality, food and drink could be most affected,” she said.

The hospitality sector will also be hit with no “barista visa” for coffee shops, despite warnings from Pret A Manger two years ago that only one in 50 job applicants were British.

“Most people who come here to work can already speak English,” she said. “But are we really going to block maths geniuses whose English isn’t great? It’s inhumane and damaging.”

She continued: “Ultimately, it will also be very difficult to attract the workers we need at all skill levels while the Tories’ hostile environment is in place. It needs to go.”

Partners at the immigration law firm Fragomen urged the government not to close the borders overnight and to reduce the cost of visas for the new era migrant.

“If it comes to a point where it is harder to access labour then don’t turn off the tap overnight. Give people time to adjust. Please make the system cheaper – it is just ridiculously expensive,” said Ian Robinson, a partner at the firm and a former policy official at the Home Office.

But with its 80-strong majority, the government can deliver on its new policy with a immigration bill expected to ease through parliament in the coming months.

“UK businesses will need to adapt and adjust to the end of free movement, and we will not seek to recreate the outcomes from free movement within the points-based system,” said the government in a briefing paper.

It also said that employers would have to work harder to recruit and retain British staff.

“It is important that employers move away from a reliance on the UK’s immigration system and as alternative to investment in staff retention, productivity, and wider investment in technology and automation,” the briefing paper added.

Special arrangements are being made for seasonal workers who harvest the fields but this is only set at 10,000 places, far below the National Farmers’ Union’s (NFU) demands for temporary visas for 70,000 in 2021.

Minette Batters, the head of the NFU, said it was “ironic” that the government was encouraging people to increase the amount of fruit and veg in diets, yet is “making it harder for that fruit and veg to be produced in Britain”.

… we’re asking readers, like you, to make a new year contribution in support of the Guardian’s open, independent journalism. This has been a turbulent decade across the world – protest, populism, mass migration and the escalating climate crisis. The Guardian has been in every corner of the globe, reporting with tenacity, rigour and authority on the most critical events of our lifetimes. At a time when factual information is both scarcer and more essential than ever, we believe that each of us deserves access to accurate reporting with integrity at its heart.

More people than ever before are reading and supporting our journalism, in more than 180 countries around the world. And this is only possible because we made a different choice: to keep our reporting open for all, regardless of where they live or what they can afford to pay.

We have upheld our editorial independence in the face of the disintegration of traditional media – with social platforms giving rise to misinformation, the seemingly unstoppable rise of big tech and independent voices being squashed by commercial ownership. The Guardian’s independence means we can set our own agenda and voice our own opinions. Our journalism is free from commercial and political bias – never influenced by billionaire owners or shareholders. This makes us different. It means we can challenge the powerful without fear and give a voice to those less heard.

None of this would have been attainable without our readers’ generosity – your financial support has meant we can keep investigating, disentangling and interrogating. It has protected our independence, which has never been so critical. We are so grateful.

As we enter a new decade, we need your support so we can keep delivering quality journalism that’s open and independent. And that is here for the long term. Every reader contribution, however big or small, is so valuable. Support The Guardian from as little as CA$1 – and it only takes a minute. Thank you.