Is Quebec's defence of Franco-Ontarians a sign of the sovereignty movement's decline? 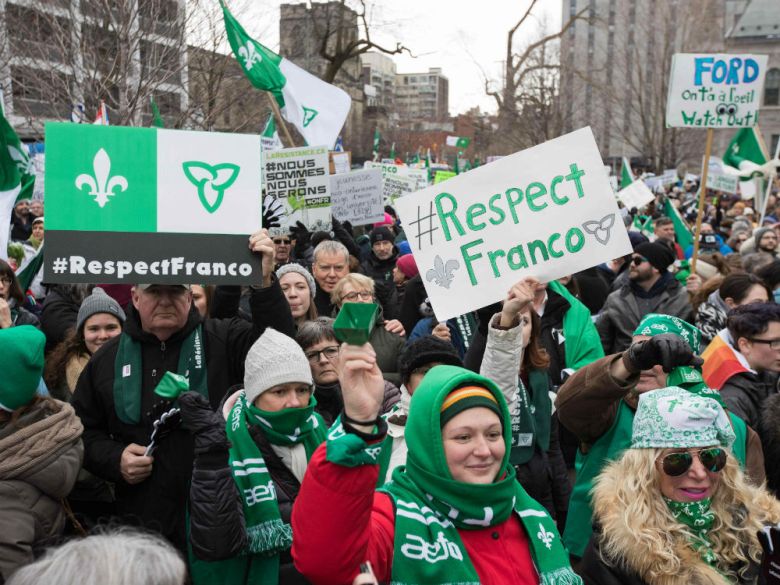 In October, Quebec media personality Denise Bombardier appeared on the hugely popular talk show Tout le monde en parle and shared her views on French-speaking communities outside Quebec. She was, in a word, dismissive.

“Across Canada, all the francophone communities have more or less disappeared,” she said.

Her comments sparked outrage among French speakers across the country. Here was proof, many felt, that Quebecers don’t realize they exist, or don’t care.

Then a few weeks later, the Ontario government announced it was cutting funding for a long-awaited French-language university and for the French language services commissioner.

The reaction from Quebec was decidedly not indifference. “I am outraged, as a lot of francophones from coast to coast are,” wrote La Presse columnist Patrick Lagacé in an unusual English-language column on what he called “bigoted cutbacks targeting the Franco-Ontarian community.”

During their first official meeting Quebec Premier François Legault pressed Ontario Premier Doug Ford to reconsider the cuts. Ultimately, the Ontario government announced it would recreate the commissioner’s position, though it would not restore funding for the university.

The intensity of Quebec’s reaction surprised some observers who suggest that, in the past, such a decision elsewhere in Canada would not have sparked such displays of solidarity from la belle province. To them, this is evidence that something new is afoot in Quebec — that with the decline in popularity of the sovereignty movement, Quebecers are taking a new interest in French-language rights outside their borders. “This is a new shift. It’s an interesting shift,” said Frédéric Bérard, an expert on linguistic rights. “And to be frank, maybe it took that Ford decision to wake people up.”

The complicated relationship between Quebec and francophone communities elsewhere in Canada dates back more than half a century. Prior to that, francophones across the country largely thought of themselves as French Canadians, according to Benoît Pelletier, a University of Ottawa law professor and former Quebec cabinet minister in Jean Charest’s Liberal government.

But in 1967, delegates from across the country gathered in Montreal for the “états généraux,” a meeting to discuss the future of French Canadians. It was here that the Quebec delegates made clear their desire for self-determination and a new national identity as québécois. “(They) let the francophones of the other provinces and territories know they didn’t want to include themselves in the concept of Canada français anymore,” Pelletier said.

The idea that the French language could only survive within Quebec became an important rationale for the sovereignty movement. Former premier René Lévesque, founder of the separatist Parti québécois, famously said in 1968 that French speakers outside Quebec were “dead ducks.”

Since then, Pelletier said, many Quebecers grew either unaware of or indifferent to the existence of francophone communities in other provinces. Wilfrid Denis, an emeritus professor of sociology at St. Thomas More College of the University of Saskatchewan, pointed to the “nationalist focus of the education system in Quebec” as the main culprit. When Quebecers travel to western Canada, he said, they’re often surprised to find native French speakers.

Statistics Canada reports that about one million Canadians outside Quebec speak French as a first language, mostly in New Brunswick and Ontario. However, the proportion of French speakers outside Quebec is on the decline — just not as much as Bombardier’s comments implied. It dropped from four per cent to 3.8 per cent between 2011 and 2016.

Today, sovereignty isn’t what it was, nor is the sentiment of Quebec superiority

Quebec’s relationship with these other francophone communities has not just been one of casual indifference. The province has actively fought against francophone minorities in several Supreme Court cases involving French-language rights, most recently in a 2015 case involving the Yukon French-language school board, said Bérard. “The main argument was that a victory for francophones outside Quebec would be a victory for anglophones inside Quebec.”

That position has been “very frustrating and hurtful” to francophones across the country, Denis said.

But Pelletier believes things are slowly changing, in part as the desire for independence has taken a back seat in Quebec. As the province’s intergovernmental affairs minister in 2006, he introduced a policy on the Canadian francophonie that sought to strengthen ties with French-speaking communities across the country. “I would say that the loss of popularity of the sovereigntist option certainly raises the interest of French-speaking Quebecers for the promotion of the French language all over Canada,” he said. Pelletier believes the Ford government’s cuts further “opened the minds” of Quebecers to the existence of the “Canadian francophonie.”

Not everyone is convinced. “If some talk about it and pretend to be worried for francophones in Ontario, it is only to end up talking about Quebec and their deep belief that the only way to live in French in this country is to be in a province where the majority is French speaking,” said Claude Couture, a professor of social sciences at the Saint-Jean campus of the University of Alberta.

That belief certainly still exists. In the wave of outrage that followed Ford’s cuts, several columnists claimed this was proof that French can only be protected in Quebec. “It’s going to become more and more difficult to defend French outside Quebec,” wrote Richard Martineau in the Journal de Montréal. If language is what matters most to francophone minorities, he wrote, “pack your bags and come to Quebec.”

Certainly it’s interesting that there is a sentiment of outrage. … Whether it translates into significant action, I don’t know

But others suggested another way forward. In an op-ed for the Devoir, Axel Fournier, a young Quebec lawyer, went so far as to propose that Quebec fund a Toronto campus of an existing Quebec university to make up for the Ontario government’s cuts. “We feel that as French Canadians, what happens in other provinces is relevant for us,” he told the Post.

Francine Pelletier, a columnist for the Devoir, wrote that “today, sovereignty isn’t what it was, nor is the sentiment of Quebec superiority,” and questioned whether Quebec is “on the cusp of a new chapter in francophone relations.”

In the Beauce, a 'handshake campaign' could decide the future of Maxime Bernier and his People's Party

Is Quebec's defence of Franco-Ontarians a sign of the sovereignty movement's decline?