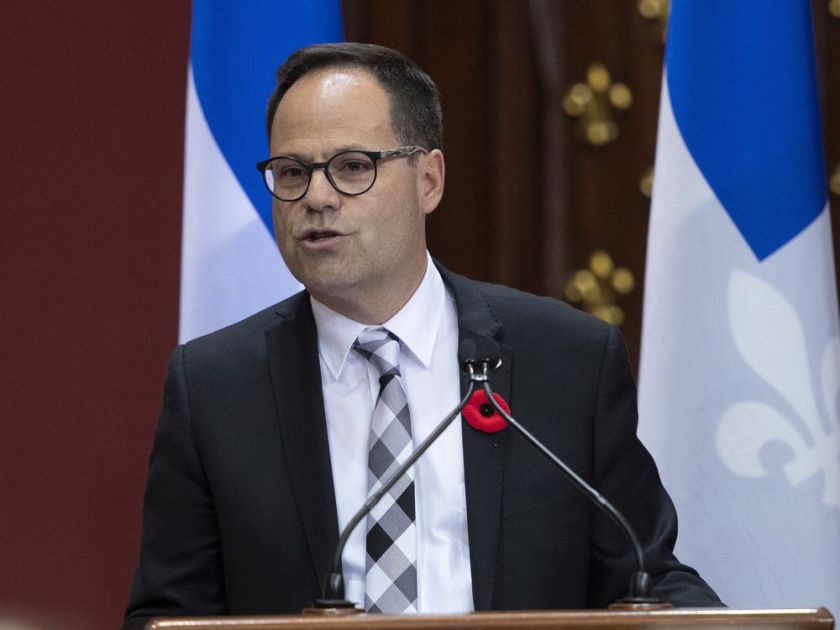 The unavoidable impression is that Alexandre Cusson is being brought in to be the old-stock French-Canadian candidate of the regions.

In heavyweight boxing in the last century, as African-Americans became dominant, a Caucasian challenger for the title would be known as “the great white hope.” Some Quebec Liberals may have found theirs.

This week, Alexandre Cusson resigned as president of the Quebec municipalities union and took out a membership in the Quebec Liberal Party.

He did it, he said, so he could attend a meeting of the Liberal general council next weekend, meet members from across Quebec, and test the water for a bid for the party leadership.

As second-term mayor of the central Quebec city of Drummondville, Cusson has shown he’s electable. And as head of the municipalities union for the past two years, he has a province-wide network of contacts among local officials.

Cusson has other advantages over the only declared candidate, former cabinet minister Dominique Anglade.

He’s not associated with the unpopular former Liberal government. He is identified with “the regions” outside metropolitan Montreal where the Liberals were all but wiped off the map in last year’s general election.

He conforms comfortably to the traditional profile of a Quebec party leader, a male, white, old-stock French-Canadian.

Anglade was born in Montreal and educated in French. But she is the daughter of Haitian immigrants.

That makes her the first member of a cultural minority ever to seek the permanent leadership of a major party in Quebec, where the most senior or sensitive government positions have generally been reserved for old-stock French-Canadians.

That may help to explain why, since Anglade declared her candidacy last June, some Liberals, including what has been described as the party establishment, have been reported to be scrambling to find an ABA candidate — Anybody But Anglade.

Well, not quite anybody. Another Liberal MNA has kept her name afloat as a possible candidate. But Marwah Rizqy is also a visible minority from Montreal, the daughter of immigrants from Morocco.

So, the ABA head-hunters kept hunting. Several names were mentioned, none of them clearly more qualified than Anglade.

Some were even unknown outside their own regions, including a defeated Liberal candidate who runs a Gaspé factory that makes windmill vanes.

All, however, had three things in common: they were male, old-stock French-Canadians, and white.

The spin is that the Liberal talent searchers want the media attention of a contested leadership election.

But last April, the well-informed Denis Lessard of La Presse reported that “some Liberals are weighing the impact of a woman, of a racialized citizen at the head of a party that has become ‘Montreal-centric.’” They were “wondering what reception she would get outside of the large urban centres.”

And this week, after Cusson made his announcement, Lessard reported that “it’s clear that the Liberal strategists saw with a good dose of concern the coronation of a Montreal woman from the cultural communities.”

But while it looks as though the Liberal backroom boys don’t want the only declared candidate for its leadership, Anglade already has significant support in the Liberal National Assembly caucus.

This week, demonstrating that she’s not backing down from Cusson, she answered his announcement with a 10th MNA’s endorsement, from Greg Kelley.

Now it looks as though the fans of a contested leadership election will get what they wanted. But the party may have reason to regret it.

In interviews this week, Cusson said he wants to avoid “a Montreal-versus-the-regions debate” in the campaign, “the worst thing that could happen.”

That’s naïve at best. The unavoidable impression is that Cusson is being brought in specifically to be the old-stock French-Canadian candidate of the regions against a woman of colour and a daughter of immigrants from Montreal.

If he does run, Quebec’s most inclusive provincial party would be divided along overlapping cultural and geographical lines.

And whichever side won, the Liberal party would be seen as turning its back on the other.

Macpherson: On Bill 21, a nationalist victory that looks like a defeat