Ottawa: Protest battle lines harden on both sides amid concerns chance for peaceful end has passed 'The moderates went back to work on Monday. They went home and sent their kids back to school. The more extreme folks stayed'

A more confrontational stance by Ottawa police declared on Friday against a protest siege on Parliament mirrors the entrenchment by convoy protesters who say their occupation is growing.

The pivot in police strategy left many frustrated residents of Ottawa asking why it didn’t come sooner and researchers of political protests wondering if it has come too late. As for protesters preparing for an increased street presence this weekend, they have spent the week digging in, bolstering their organization and infrastructure.

Among their reinforcements is a former RCMP officer — who until recently worked in emergency response protection for Parliament — to help with security and a team of lawyers from a conservative legal advocacy group.

The action backs up protesters’ promises to stay until vaccine mandates are abolished.

It was naïve of police to think the protest was going to “magically de-escalate itself,” said Regina Bateson, a University of Ottawa professor who studies politics and collective action.

“There is just no reason to believe these people are going to become more moderate over time, or that they’re simply going to up and leave, or they’re becoming less organized over time,” she said.

“To the contrary, they’re becoming more organized as time goes on. They’re developing more capacity to act collectively, potentially to carry out violence or to do risky things. And they’re probably attracting more extreme elements now than they were in the beginning.”

Police Chief Peter Sloly at midday Saturday reported 1,000 vehicles, roughly 5,000 protesters and at least 300 counterprotesters in his city’s streets. That was fewer people than there were in last weekend’s protests but a large increase since Friday.

“This city is under siege,” said Sloly. “This is a threat to our democracy. There’s a nationwide insurrection,” he added. “This is madness.”

One man rode a horse down Wellington Street, the main road in front of Parliament, waving a “Trump 2024” flag, while diesel fumes and the soundtrack of the protests — a cacophony of deafening horns, revving engines and chants of “Freedom!” – filled the air on a sunny and chilly afternoon.

The original protest convoy, which started to voice opposition to vaccination mandates and against Prime Minister Justin Trudeau, is attracting people with wider grievances and more radical positions.

“The moderates went back to work on Monday,” Bateson said. “They went home and sent their kids back to school. The more extreme folks stayed.

“And different people will be coming to town this weekend.”

She worries counter-protests against the occupation, planned for Saturday, will be a dangerous mix.

“It is a recipe that has led to people getting injured or even killed in other, somewhat similar, situations.”

“What struck me was how much more embedded the protest was,” he said. They have built food stands and fire pits, set up large barbecues and stockpiled wood and propane tanks.

And there are trucks, pickups, and cars, of course, but most no longer in a moving convoy. Several drivers have removed their vehicle’s wheels and put them up on blocks.

One bears the sign “I am holding the line.”

“As a tactic, part of the point of a protest camp is to dig yourself in. To find ways to hold ground. Parked trucks do this — but taking the wheels off is next level,” McCurdy said.

“Tents have become this symbol of resistance and occupation,” he said of past research, mostly on left-wing protests. The convoy protesters have erected tents that can provide shelter from the elements but also private meeting places.

“This is an important thing about protests and protest camps in particular,” said McCurdy.

“Whether it is successful or not, what’s important is protest is also about identity creation and reinforcement and so protest camps where you live communally with people, you’re able to imagine an alternative world.”

Pat King, a far-right personality who has become an unofficial leadership figure at the protest, in a Friday livestream issued his own warning about the weekend.

He told supporters he is expecting “another million people” and more trucks to arrive and said there would be a fireworks display.

He accused Ottawa police of encouraging a counter-protest with dangerous elements of antifa (anti-fascist activists) who will try to spark violence.

“You’re putting a lot of peaceful protesters at risk,” King said. “It’s your duty to protect the public,” he said of police. 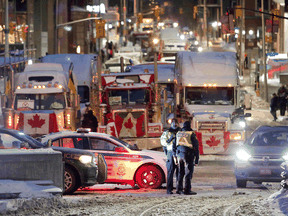 Police officers stand in front of trucks as truckers and supporters continue to protest COVID-19 restrictions in Ottawa, February 4, 2022. PHOTO BY PATRICK DOYLE/REUTERS

In another broadcast Friday, he cast the occupation in war terms, saying soldiers had fought for the rights of Canadians in the past, adding: “You haven’t had to fight for your rights, until now.”

The official organizers of the Freedom Convoy 2022 protest have said that King, who in the past once said bullets were the only avenue for change, is “not directly involved in leadership.”

The official leadership, led by Tamara Lich, have shored up their own preparation as occupiers of the streets. She is the woman behind the wildly successful donation campaign that raised more than $10 million before the host site, GoFundMe, placed it on pause.

On Friday, GoFundMe announced it will refund the donations.

“We now have evidence from law enforcement that the previously peaceful demonstration has become an occupation, with police reports of violence and other unlawful activity,” GoFundMe said in a statement.

Until recently, Danny Bulford was a corporal with the RCMP. He said he resigned because of the force’s requirement for members to be vaccinated. On Thursday, Freedom Convoy 2022 organizers introduced Bulford as their security consultant.

In anti-vaccine mandate speeches beforehand, Bulford said he was a Mountie for about 15 years, with the last eight of them working on the personal protection detail for Trudeau. When he says his past job in speeches, it provokes laughter from his audience and a wry smile from him.

“The irony is not lost on me — and probably not lost on him either,” Bulford said at a speech in November.

The RCMP confirmed Bulford left the force as a corporal with “his last substantive” position being with the Emergency Response Team at the National Division stationed in Ottawa.

Lawyers with the Calgary-based Justice Centre for Constitutional Freedoms also arrived to help. Keith Wilson said he and a team of other lawyers were on the ground to provide “whatever legal needs they might have.”

Wilson has not tamped down protest rhetoric.

On Friday evening he released a video statement from a hotel room in Ottawa that had the look and feel of a hostage video.

In it, he asked people to get his message out to the world that “we are being censored.” Wilson attacked Ottawa Police Chief Peter Sloly’s announcement of planned enhanced enforcement against protesters.

The chief, Wilson said, “essentially announced an assault on the protesters,” with “measures that we normally see instituted by oppressive regimes around the world.”