He applauded us for hiring bilingual staff in key positions. Almost a quarter of our staff spoke French. And when it came to the opening ceremonies, few knew that we had tried to have the famous Quebec anthem Mon Pays in the lineup, but were shot down by the song's author.
On the morning of the first Monday of the Games, Feb. 15, I was joined in the news conference by Quebec Premier Jean Charest. It was Quebec Day at the Games, something each province and territory was allocated as part of the partnership agreements we had signed with them earlier. He was still beaming from Alexandre Bilodeau's gold-medal victory of the night before. Then it was time for questions.
The first one was for me. It was posed by a burly guy sitting right at the front. He had a shock of white hair and a white beard to match. It was Réjean Tremblay, a popular and influential columnist with La Presse. As I recall, he asked a question of me in French and asked that I answer it in French as well, a cheap shot intended to put me off balance.
So this is how it's going to be, I thought.
Taking the high road
I had rarely faced a journalist who was as hostile and surgical as Réjean was that morning. He wanted to know why there wasn't more French content in the opening and wasn't satisfied with any answer that I gave.
Tempting as it was to take a run at the lack of co-operation we had received in Quebec trying to secure talent and music rights, I chose to take the high road instead.
It was a dead certainty that they were going to put Jean Charest on the spot and ask him what he thought of the opening. I knew what Jean was going to say: He loved the show but was disappointed and wished there had been more French throughout the production, though he was happy with VANOC's effort over all to promote and respect French Canada at the Olympics.
If he hadn't, he would have been fried by Réjean in his next widely read column. So I wasn't really upset that the Premier said what he said. He had little choice.
But the French journalists wanted me to apologize for the opening and I refused. I said we had nothing to apologize for and that I was proud of the measures we had taken both during the opening and throughout the organizing of the Games to promote Canada's other language. I sure wasn't going to say sorry.
Afterward, I was steaming at those who were attacking us about the French content for purely political reasons, including federal Heritage Minister James Moore. Canada's Commissioner of Official Languages, Graham Fraser, also jumped on the bandwagon, announcing he would investigate the complaints that there wasn't enough French content in the show.
An investigation? This had to be some kind of joke. The sum total of complaints Mr. Fraser had received, we were told, was about 30. Unlike his predecessor in the role, who had been a great collaborator and supporter of our efforts, Mr. Fraser pointed fingers from a distance but rarely pitched in with ideas or support.
Later that day, the Quebec government was hosting a reception at Quebec House, which was in a sparkling and innovative temporary building on the shores of False Creek, across from the Athletes' Village. Under the circumstances, it wasn't an event I was dying to attend. I knew it would be awkward from the moment I got there.


But I'd be damned if I was going to be intimidated into not going. I wasn't going to run from anybody. Quebec had been our first provincial partner. Jean Charest had been there for us from the beginning, his mild but reasoned criticism aside.
When I arrived, the atmosphere inside was terrific. People were in a great mood, still high from Alexandre's gold-medal run. Although no one was saying anything to me directly, I could feel the French controversy floating above the crowd.
I wasn't there long before I saw James Moore heading toward me. James is a big guy you can see from anywhere. He has jet-black hair combed straight back and always reminds me of someone from the cast of Mad Men. He was smiling. I doubt I was.
We shook hands. “You're probably a little annoyed at me,” James said, almost right off the bat.
“Well, I was certainly disappointed by your comments, no question,” I said.
“Well, I hope you understand that I was just doing my job,” James answered. “This isn't anything personal.”
I told him I understood he was doing his job, but if he was going to criticize us, I thought he at least needed to put the matter in context.
When James was appointed Secretary of State for the 2010 Olympics, we gave him insider access to virtually all of our decisions. He knew about the myriad of things we had done as an organization to reflect the French culture and influence in Canada, initiatives for which we had won wide praise.
Instead, he just dumped on us for the lack of French in the opening, when we were still reeling from the death of Georgian luge athlete Nodar Kumaritashvili. His timing was impeccable.
“You should know, James, that the number of people who are bilingual and working for VANOC is dramatically higher on a percentage basis than the number of bilingual people working for the federal government in Vancouver,” I said, as I had many times.
The truth was the number of bilingual volunteers we had amassed to deliver the Games was equal in size to a mid-size Canadian town. By any measure, we had moved heaven and earth to live up to this obligation. And he knew it.
“James,” I said, “I briefed you in person on this stuff and you had my direct line. All you had to do was pick up the phone. … You are our partner and we deserved better. … And frankly I didn't appreciate waking up Saturday morning and reading what you had to say in the paper.”
Going to the top
By the next Monday, there was mounting pressure from commentators like Réjean Tremblay and from cultural organizations to increase the amount of French content in the closing ceremonies to make up for the perceived lack in the opening.
You can imagine how thrilled we were. The show was long since ready to air. It would be one of the biggest shows ever produced in Canada. It had been carefully put together over a couple of years. Rehearsals had been going on for months.
I knew already that there was more French in the closing than in the opening. That was just how it was put together. But I couldn't be more specific without spoiling the surprise.
The matter was becoming a big problem because it was zapping energy out of our ceremonies team, who were already running on empty. Our director, David Atkins, was ready to blow a gasket at any moment. I was hearing that we might soon be getting a call from the Prime Minister's Office about the matter.
When I heard this I thought, “Okay, that's enough. I've got to put an end to this now.” I managed to track down the number for the PMO through a friend. I told the woman who answered the phone that I needed to talk to the Prime Minister.

She said she would go and find out what his schedule was and get back to me. It couldn't have been more than a half-hour later when my cellphone rang. The voice on the other end said, “The Prime Minister would like to talk to you.”
Deep breath.
I thanked Stephen Harper for calling me back and began outlining the predicament VANOC was facing. I also shared my thoughts with him about some of the personal criticism I was receiving for my efforts to speak French in my opening address.
One blog I came across accidentally was merciless in its attack on me. “John Furlong's attempt at French was a disgraceful symbol of bilingualism,” the person wrote. And for good measure he said my attempt at our second language was “atrocious” and “disgusting.” Boy, that made me feel good.
I shared my frustration about this with the Prime Minister, whom I saw as an introverted and private man, just as I am. “This is not my language,” I told him. “This is very, very difficult, sometimes terrifying for me.”
The Prime Minister couldn't have been more thoughtful and sympathetic. “I've had the same challenge in my own career,” he said. “I've had it my whole political life.”
He told me that one of the ways he managed around it was to speak French early in his remarks. He found that francophones were more respectful when people made an attempt at French early on.
“This is the advice I would give you,” he said. “Put the French up front and people will cheer you for it. Don't worry about the critics. The people in Quebec will be delighted that you made the effort. It's all about effort.”
“But, Prime Minister,” I said, “you're a rock star at this compared to me. This is not comfortable for me. I look down at my notes and the words start moving on me.”
He chuckled, but was generous with his support and assurances. He made me feel a whole lot better about the situation.
A final showdown
I wasn't quite finished with James Moore though. After the reception at Quebec House, we would have a couple more conversations. And I was no less annoyed about the controversy.
“James,” I said at one point, “we're partners, for God's sake. I mean, I'd never do this to you guys. I'd never get up publicly and say bad things about the federal government. I have never once criticized you guys for anything. I have always been thoughtful and respectful.
“And who, exactly, is benefiting from all this, James? People from all over the world are looking over our fence and we're fighting with each other. How does that look?”
And that was pretty much the last time we talked about it. I think the conversation with the Prime Minister had an effect because shortly thereafter the matter seemed to vaporize. When people approached James Moore looking for a quote, he began telling reporters that there was nothing more to say and that the controversy was overblown.
The only other time French was an issue was after the Games were over. We decided to send MPs, B.C. MLAs, senators and municipal council members from the host communities each a letter, with a souvenir volunteer's blue jacket, to thank them for their support over the years.
Universally the reaction was heartfelt, with one exception: The Bloc Québécois sent us a letter telling us that if we did not rewrite our letter to their members in French, they would return all the jackets to us. The matter got resolved and they kept the jackets, but it was a final shot that didn't show a lot of class.
***
Excerpted and adapted with permission from Patriot Hearts: Inside the Olympics that Changed a Country © 2011 by John Furlong with Gary Mason, published by Douglas & McIntyre. 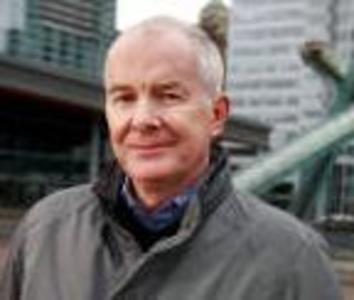