Chris Selley: For the NDP in Quebec, the dream is over 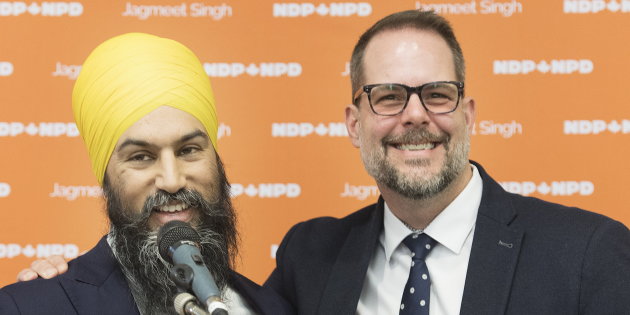 The NDP is officially on the offensive in Quebec. On Monday in Montreal, newly minted deputy leader Alexandre Boulerice promised the party’s “environmental plan … will put an end to half-measures.” Brigitte Sansoucy, chair of the NDP’s Quebec Caucus, suggested they would offer “concrete solutions for Quebecers (on) issues like employment, agriculture and support for families.”

Especially considering the current state of Justin Trudeau’s brand, there is some reason for the NDP to hope, per the press release, that such things might “rally progressives from coast to coast to coast” behind them. But leader Jagmeet Singh seemed to hint at new adventures in asymmetrical federalism, as well. “I firmly believe that Quebec is a distinct nation within our country, and I promise you today that I will be an ally for Quebec, and that I will do things differently,” he said. Between now and the Fête Nationale in June, we are to expect “a series of Quebec-specific announcements.”

It is not clear whom Singh intends do things differently than. But “distinct nation” was an interesting choice of words.

It’s often said en passant, even in media reports, that the House of Commons declared Quebec a nation in 2006. It did not. By a vote of 265-16, MPs “recognize(d) that the Québécois form a nation within a united Canada.” It was the culmination of a ridiculous game of silly buggers that began with one of Michael Ignatieff’s more tin-earned moments in Canadian politics and ended with competing Québécois-nationhood motions winging around the House of Commons. It was Stephen Harper’s that eventually won the day. But not even Gilles Duceppe’s version declared Quebec itself a nation. And even the NDP’s Sherbrooke Declaration, which laid the political and philosophical groundwork for the party’s 2011 breakthrough in Quebec, speaks only of Quebec’s “national character.”

The difference between “Quebec nationhood” and “Québécois nationhood” (to say nothing of Quebec’s “national character”) is maddeningly vague. But the difference is very real. As Michael Chong said at the time, in resigning as intergovernmental affairs minister, Québécois nationhood “implies the recognition of ethnicity.” He argued the motion was a threat to the idea “one nation, undivided, called Canada, based on civic and not ethnic nationalism.”

How prescient he was. Singh may well not have meant anything by his choice of words. But both Quebec and Québécois nationalism have changed enormously since the NDP began appealing to it.

The Sherbrooke Declaration became official party doctrine in October 2005. Shortly thereafter, Quebec politics became consumed with an often-hysterical debate around “reasonable accommodations” for religious minorities. In the March 2007 election, Mario Dumont’s Action Démocratique rode that debate to official opposition status. Later that year, the immigrant-free hamlet of Hérouxville made international headlines with its flamboyantly Islamophobic code of conduct that, among other things, banned stoning women to death. Instead of being laughed into oblivion, it was hailed as a “heartfelt cry” not just by Dumont but by former Parti Québécois premier Bernard Landry. The PQ took this all on board, culminating in Pauline Marois’ grotesque “values charter.” The Liberals hoped to defuse it with the Bouchard-Taylor Commission. When that didn’t work, they adopted what is now just about the most moderate position available in Quebec politics: That women who wear niqabs shouldn’t be allowed, among other things, to go to public school. Today the governing Coalition Avenir Québec, successor to the ADQ, vows to bring in legislation that would, among other things, make it illegal for the turban-wearing Singh to work as a public school teacher.

Speaking of often-hysterical debates, we now have the SNC-Lavalin fiasco. The NDP has quite rightly called for a public inquiry. “From the Paradise Papers to SNC-Lavalin, it’s obvious that Justin Trudeau and his Liberal government are not on your side — he’s focused on favours for his friends,” Singh told voters in Burnaby late last month.

“They have to allow for a public inquiry so Canadians can hear the truth,” NDP MP Nathan Cullen told reporters in Ottawa the same day. “Because what we’re talking about is a government who is maybe willing to have two sets of laws — one for you and me and everybody else, and then another set for the very, very well connected.”

The problem with that is a significant chunk of the nationalist voters Singh is after in Quebec see the entire controversy — literally — as an anglophone hate-plot perpetrated by the Rest of Canada on francophone Quebecers.

Whatever one thinks of the compromises involved, the NDP did a great thing in 2011 by bringing Quebecers back into federal politics. At this point, however, there is no federalism asymmetrical enough to make the coalition work. The NDP cannot possibly vouchsafe outrageously unconstitutional restrictions on minority rights or government protection for giant misbehaving corporations deemed “national champions” in Quebec without instantly losing every shred of credibility among supporters and potential supporters in the Rest of Canada.

Singh can announce all the Quebec-specific things he wants. The simple fact, sad to say, is that the province no longer makes any sense as part of a pan-Canadian progressive movement.

Chris Selley: Tory leadership race should be a battle of ideas, not just personalities

Chris Selley: Latest trial balloon from Quebec is another attack on minority rights