Canada today slipped beneath the waves, like the Titanic, but into deep dictatorship. 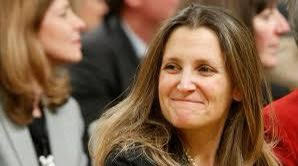 By Marcel Woland for The Saker Blog

Today, the Minister of Finance, Morneau, was forced by Trudeau to resign, after he and Trudeau were caught (*see below) diverting one billion dollars to personal, non-governmental, associates. George Soros, through an Ukrainian agent/mole, is now the de facto head of Canada.

With Canada rudderless, in a time of alleged pandemic and economic collapse, the new Minister of Finance, DPM and Intergovernmental Affairs-in-one, has already promised to “help women” using money-printing and the almost empty Treasury of Canada. Women voters are likely the last hope for the oligarch playboy, thrice found guilty of ethics violations, minority PM Trudeau. His support at the last election was 30%. By now it is likely down to 20% of die-hard, mostly female, fans.

Shutting down Parliament completely, which he has partially done for months under cover of the alleged pandemic, will prevent a motion of non-confidence being brought, even if the Sikh leader of the NDP, who keeps Trudeau in power, remembers suddenly that his allegiance is to the country and not to the ‘white Sahib’ PM.

* Our Prime Minister and his ex-Finance Minister were caught recently attempting to siphon one billion dollars to an alleged pedophile cult and real estate assembly crime family(the Kielburgers), with which both their families had business dealings, called The WE Foundation. So far we know that the WE Foundation, or its subsidiaries, had paid the PM  and the former Finance Minister and their families over 500 thousand dollars in ‘free vacations’ and ‘speaker fees’.

Here ​(below) ​is the new de facto Queen of Canada, Chrystia Freeland who concealed her family’s Nazi past.  “Look upon her​ works​, ye ​M​ighty, and despair.”​ (apology to Percy Shelley) ​ She was instrumental in the coup d’etat in the former The Ukraine, working with various Soros NGOs and the USSD as well as other quasi-criminal organizations. In this time of collapsing trade, and nuclear proliferation, she has long been banned from Russia in any capacity for Russophobia and crazed antagonism towards one of the world’s three “superpowers”. She of course makes no apology for this and the Canadian press dares not pressure her, even if they wanted to. She has also accelerated the destruction of the Canadian economy by the arrest, requested by the USA, of Meng Wan Zhou, CFO of Huawei, in the West’s il-thought out and failing trade war with China.

And here, for some comic relief, on this bleak day for Canada indeed, is the eternal inspiration of crooked, low-potential, high-achievers (though a bit taller than the micro-Mini-Me Freeland) Pooh-Bah from The Mikado by Gilbert and Sullivan  https://youtu.be/jbpUzCFCy_8?t=889  (to 18:13) …but the whole of The Mikado in this Stratford Ontario Canadian production is often delightful and yet quite a dark and timely tale of misrule. Perfect viewing for a luxurious solitary confinement.

Meanwhile, under cover of press silence and collusion, as in Russia, in 1917, the attack on the Church is  advancing at full speed: