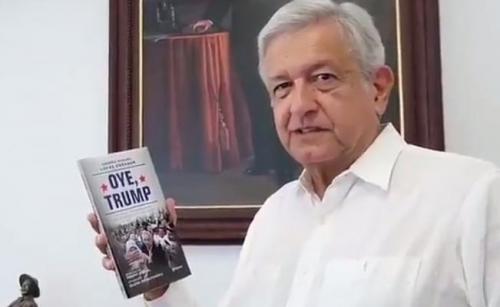 Though maverick leftist Andrés Manuel López Obrador confidently pledged during his campaign to "put (Trump) in his place," the incoming president of Mexico has revealed that he sent a letter to President Trump in hopes of jump-starting a new relationship between the neighboring countries.

The letter was reportedly delivered via a delegation of senior US officials that met him in Mexico City on July 13, and its contents read aloud by Obrador's proposed foreign minister Marcelo Ebrard at a press conference on Sunday. It suggests that the U.S. and Mexican administrations should work together on key issues of trade, migration, development and security after cooperation in these areas have reached their lowest point in decades, and further floated the idea of establishing a fund toward that end.

"I am encouraged by the fact that we both know how to fulfill what we say and we have faced adversity successfully. We managed to put our voters and citizens at the center, and displace the political establishment," Lopez Obrador wrote to Trump while playing on the sense of both leaders having general "outsider" status.

It appears the conciliatory letter could already be making a positive impact, as Trump on Monday afternoon announced he's currently talking with Mexico about "very dramatic" trade action, according to Bloomberg. Speaking at the White House "Made in America" event, the president said further that Mexico's President-elect Obrador is "a terrific person" after the two spoke "at length on a call".

Lopez Obrador's letter further called for joint efforts by U.S., Mexico, and Central American countries to seek initiatives that would directly engage the root causes of migration, identified by Obrador as the result of trends in poverty and violence that pushes people from their homes.

Crucially, the president-elect called on Trump to pursue renewed NAFTA negotiations, stalled after a year of talks involving wide disagreements over such issues ranging from auto-content rules to a sunset clause.

Since then, as an AFP report concludes: "US tariffs on Mexican steel and aluminum, Trump's 'zero-tolerance' policy on undocumented immigrants, and President Enrique Pena Nieto's two abrupt cancellations of visits to Washington have only added to the tension."

More recently, Trump said on July 18 after "very good discussions" with Lopez Obrador that he's considering a separate trade deal with Mexico, and that he could "negotiate with Canada at a later time".

"It is worth making an effort to conclude the renegotiation of the North American Free Trade Agreement," Lopez Obrador wrote in the newly unveiled letter, subsequently posted to his website. "Prolonging the uncertainty could slow down investments in the medium and long-term." And further, "I propose to resume negotiations with the participation of representatives from Mexico, Canada and the United States."

Mexico's incoming president on Sunday said he had floated the idea of a new relationship between the neighboring countries in a letter to US President Donald Trump. Andres Manuel Lopez Obrador said...

Lopez Obrador garnered a broad populist following and won a landslide victory at 53 percent of the vote — far ahead of his biggest opponent, PAN’s Ricardo Anaya, who logged just 22 percent of the vote — with his Morena party also winning firm control of Mexico’s government, while promising to boost spending in social welfare and quash corruption in government. But he also crucially drew on voter discontentment by promising to stand up to Trump.

What are widely perceived as anti-Mexican insults and tirades previously issued by Trump during his more freewheeling and off-the-cuff moments that were especially characteristic of his campaign — including attacks on NAFTA and repeat promises to force Mexico to pay to "build that wall!" — took center stage in Mexican politics of late during the presidential campaign.

For starters, a little over a year ago Obrador published a bombshell provocative book titled Oye Trump (which translates to "Listen up, Trump"), slamming the US president as "erratic and arrogant" and he's elsewhere called his rhetoric "neo-fascism".

He said in front of National Press Club reporters while on the campaign trail during a visit to D.C., for example: "President Trump's approach of blaming migrants for the problems of the United States has been excessive. We will not allow that, you can't implement a campaign of hate against Mexicans because that is neofascism."

Obrador also said at a presidential debate in May that he would make the White House respect Mexico: "Trump is going to have to learn to respect us," he said. "That I can guarantee you."

It will be interesting to see if after Obrador takes office on December 1st the two "anti-establishment" leaders, both swept into office by a wave of anger-fueled populism, can heal the US-Mexico rift.

Meanwhile, as news of the Trump-Mexico potential thawing in relations and seeking ways forward on trade has hit, Mexico’s peso reversed earlier losses, and promptly rose 0.7% to 18.8944 per dollar.