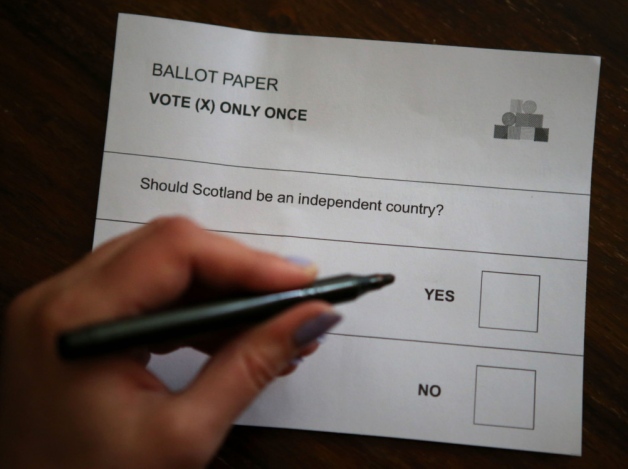 TWO-THIRDS of Scots want another independence referendum within the next decade and more than half think one should be held within five years, a poll has revealed.
Little more than a month after the most significant vote in Scotland’s history, a majority of the public say they are prepared to repeat the process within the foreseeable future. According to the poll commissioned by STV, 66 per cent said they backed another referendum within the next ten years, regardless of the circumstances.
The research, which was carried out by Ipsos Mori, also found that 58 per cent of people support having another vote in the next five years.
The polling firm questioned 1,029 people in Scotland for the survey, which was conducted in the week leading up to Wednesday. The pollsters also looked at the sample’s views when presented with a number of political outcomes that could come to pass in the near future.
More than half (53 per cent) of people said they supported having another referendum if the Conservatives win a majority in next year’s general election, while 54 per cent said a vote should take place if the Tories win in May but do not have any MPs north of the Border. Meanwhile, 55 per cent are in favour of a second independence referendum if the UK votes to leave the European Union in 2017.
In the run-up to the 18 September referendum, senior SNP figures reacted to suggestions that Scotland would become trapped in a cycle of “neverendum” by saying the recent vote was a “once in a generation” opportunity for ­independence.
Since then, incoming First Minister Nicola Sturgeon has said it is now a question of “when not if” Scotland becomes independent, arguing the timing of another vote was a matter for the Scottish people. When presented with the poll’s findings last night, the SNP ­referred to a speech Ms Sturgeon made this week when she said: “I am regularly asked if I think there will be another independence referendum and when that might be.
“My view on that is simple. It will be when the Scottish people decide the time is right. But, you know, every time one of our political opponents suggests that I rule out a referendum, it seems to me that they miss this fundamental point. Whether and when there is another referendum is not just down to what I do. It will also depend on what they do. They’ll never persuade us that independence is not best for Scotland.”
Labour, however, took the view that the independence had been settled in September when a majority of Scottish people (55 per cent) voted against breaking up the UK.
A spokesman for the Scottish Labour Party said: “Six weeks ago the people of Scotland made their voice heard when more than two million voted to remain part if the UK. This is the settled will of Scots and the SNP should drop their obsession with independence and get on with using the powers they have to make a difference right now.”

Cameron: New powers for Holyrood with No vote